Welcome to the Fox Run Elementary School Library: Leader in Me 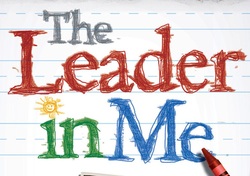 Being a Leader by Robin Nelson
303.3 NEL
A basic nonfiction book that looks at how children can be leaders at school, in their community, and at home.

Leadership by Kris Hirschmann
303.3 HIR
A more in-depth look at what leadership is, breaking down the elements that create effective leaders. Chapters cover such topics as: leading by example, taking charge, teamwork, being decisive, commitment, attitude, communication, consistency, flexibility, respecting others, and knowing your limits. Each topic is illustrated with examples of both historical and present-day leaders, including young people.

The Little Engine That Could by Watty Piper                                              E PIP
Most are familiar with this classic tale of the engine that is too small, but when everyone else refuses to help get  the toys over the hill to the children, the littlest engine keeps trying … “I think I can I think I can”… until she achieves her goal.
The Boy Who Harnessed the Wind by William Kamkwamba
B KAM
This true story of a boy who faces overwhelming odds in his home country, yet perseveres in his learning and brings electricity to his small village. Could be used with multiple habits - like Begin with the End in MInd.

Habit #2: Begin with the End in Mind

A true story of a young woman who heads to China in the 1930's to bring back a panda. The fact that she does this alone, in a time when young women were not given much respect or rights, shows her perseverance and commitment to the end that she and her former husband had in mind.

Ryan and Jimmy: And the Well in Africa That Brought Them Together by Herb Shoveller                       361.7 SHO
This true story follows the amazing gift that Ryan Hreljac gave to his friend Jimmy - a well that changed the lives of his village. When Ryan was only 6 years old, in first grade, he heard from his classroom teacher about the problems that people in other parts of world faced daily, such as lack of safe drinking water. Ryan didn't forget this lesson! He rose to the challenge and worked to raise the money necessary to build a well in Uganda,

The Three Little Pigs – any variation – compare how pigs each approached their task – the first two pigs are clearly focused on just getting their house built and getting on with their fun, while the third pig focuses on building a house that is safe and secure.

Habit #5: Seek First to Understand, Then to be Understood

Swimmy by  Leo Lionni (E LIO)
“Swimmy is a little fish swimming alone in the ocean. He finds a school of fish like him and encourages them to come with him to see the other amazing ocean animals- but they are too scared. Swimmy uses synergy and leadership to come up with a plan.” (Covey, n.d.)

Energy Island: How One Community Harnessed the Wind and Changed Their World by Allan Drummond  (333.9 DRU)
"The island of Samso in Denmark was once a very ordinary place, and the people who lived there were ordinary too. In fact, the only thing that made Sanso unusual at all was that it was very, very windy. Then the ordinary citizens of this ordinary island decided to do something extraordinary: they drastically reduced their carbon emissions and became almost completely energy independent. And they did it all with the help of the wind! This inspiring true story proves that, with a big idea and a lot of hard work, anyone can make a huge step toward energy conservation." The members of Samso, both children and adults, synergize to save their community.

The Crayon Box that Talked by Shane Derolf   (E DER)
This book begins with all of the crayons arguing about which color is better, until the narrator draws an illustration and makes each color realize that they all are important to the final picture.

Stone Soup - any retelling  (398.2  MUT)
This folk tale shows how the soldiers “trick” the townspeople into synergizing and creating a product that is
better than any one family could create on their own. Each person contributes to the soup, making a soup that is delicious and shared by all.