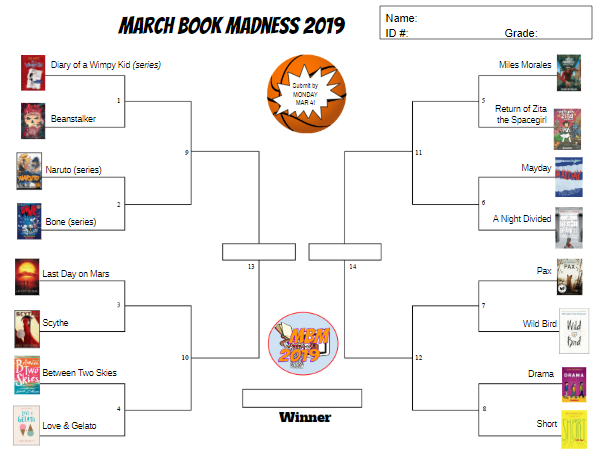 You can  make your prediction for which title will be crowned the MBM Champion by filling out a bracket sheet and turning it in to the LC by March 4th. If your choice wins the tournament, your name will be entered into a drawing for a $50 Barnes & Noble Gift Card!

TURN IN your completed bracket sheet to the LC by the end of Monday, MARCH 4th!

All predictions must be made by March 4th to be entered into the drawing for a $50 Barnes & Noble Gift Card!

The tournament begins on March 4th. Each day there will be a new match-up for students to vote for on the LC webpage (Google form) until the  2019 MBM Champion is crowned! Every time a student votes, they will be put into our Fan Zone Prize Drawing at the end of the tournament.

Starting on March 4th, students can come to the LC to see our March Book Madness Tournament Bracket Display on the outside windows. Each of the 16 chosen books will have a QR code that can be scanned. By scanning the QR code, students can use the FlipGrid app to submit their short video response explaining why they love that book and why it should win the tournament. At the end of the tournament, we will have a prize drawing from all of the FlipGrid Fan submissions!